You are in:
Home / News / QA patient thanks Renal Team after being able to compete in Transplant Games 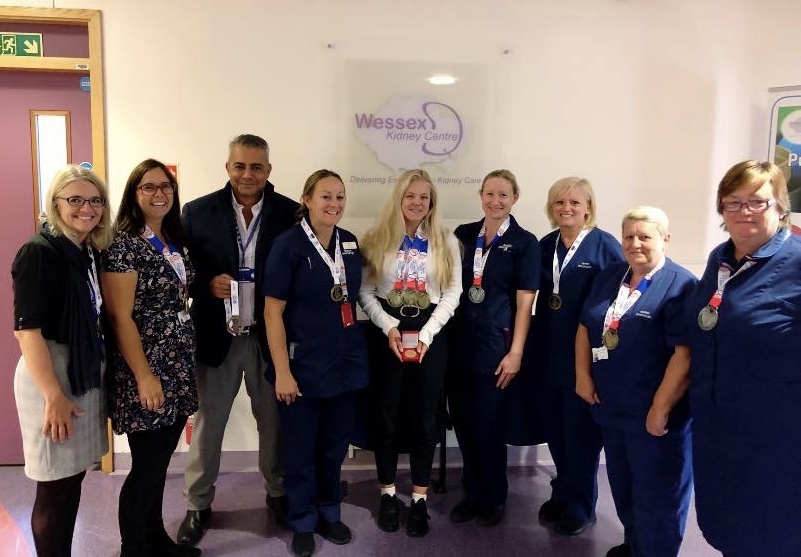 Nicole Mackenzie, a patient at QA Hospital, would like to say thank you to the team who has allowed her to live a normal life and go on to compete in the Transplant Games.

Following a kidney transplant in 2009, and now under the care of the Renal Team, Nicole praises the team for helping her be able to compete in the British Transplant Games in July alongside her Portsmouth Team. Nicole says: “Without the amazing team at QA I wouldn’t be able to have these amazing opportunities. I have achieved so much alongside my team, whilst raising awareness of organ donation.”

The team of 10 brought home a total of eight medals from the games held in Newport, Wales – with Nicole bagging herself four gold medals and the Best Female Athlete award. “I am absolutely over the moon with this year’s result. The level of competition has increased immensely which is fantastic to see.

“I would like to say a big thank you to my dad who was my donor, and my coaches, none of this would be possible without them. I would also like to thank the Renal Team for their care and support, I feel very fortunate to have my renal care in such great hands.”

Nicole also took part in the World Transplant Games in August, where more than 70 countries attended with 3,000 athletes competing in over 15 different sports.

This was Nicole’s fourth World Games, where Nicole competed in swimming and won five gold and two silver medals as well as breaking two world records.