If you think you may have coronavirus symptoms including a new continuous cough, a high temperature or loss of taste/smell, please follow self-isolation guidance and request a test online. If your symptoms are serious, or get worse, visit the NHS111 online service.

All visitors and outpatients are required to wear a face covering at all times while at the hospital. Please plan ahead and bring one with you.

Visiting is possible in some circumstances, please see our most up to date guidance here.

You are in:
Home / News / Father of two shares inspirational story for World Stroke Day 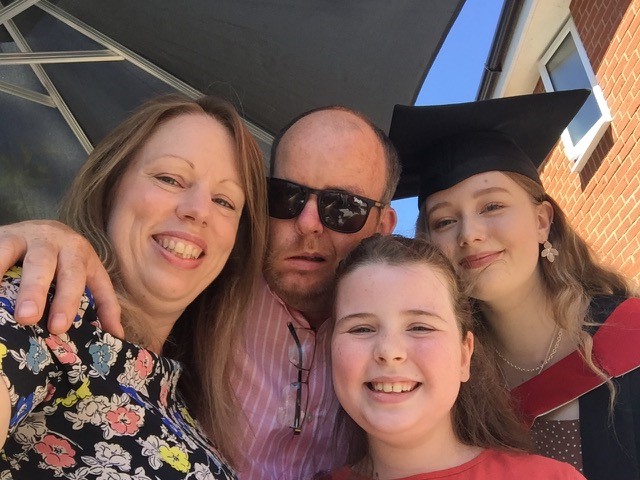 From biking to scuba diving, to enjoying day trips out with his family, that all changed for 45-year-old Richard Ponting when he suffered a stroke back in August 2019.

The father of two from Fareham went to work like any other day, a Site Manager at a secondary school.

Richard had been at work for less than an hour when he came over tingly. After sitting down waiting for the sensation to go, Richard felt his whole body go weak, unable to move or talk.

Luckily for him, a colleague found him and called an ambulance where he was rushed to Southampton General Hospital.

This was when Richard was given the news he had suffered a hemorrhagic stroke (bleed on the brain), within the brain stem caused by abnormal blood vessels that were congenital. “It was completely out of the blue and there were no previous warning signs or high blood pressure. I’m not overweight or a smoker either,” explains Richard.

Richard spent the next six months in hospital, first in Neuro Intensive Care at Southampton General Hospital, before being transferred to Critical Care at Queen Alexandra Hospital (QA). When well enough, Richard later moved to F4 Ward, then finally to F1 Ward.

Although Richard’s life has changed for both him and his family, he continues to have a positive outlook on life. He says: “My stroke happened completely out of the blue and took me by surprise, but I have never once said “why me?” because quite simply “why not, me?”

“I think I spent more time worrying and being concerned for how my family would be feeling, rather than thinking about how I was feeling. My wife and daughters were devastated. Our world had been turned upside down.

“For the first month I was extremely ill, fighting off pneumonia and chest infection after chest infection. To go from a completely fit and healthy person to severely disabled in the blink of an eye was a complete shock and there is a sense of grief for the life we used to have.  But thanks to all the interventions and support, we now have a chance of creating a new chapter in our life.  Just this time it comes with a wheelchair!”

As a result of the stroke, this has affected Richard’s mobility, hearing, eyesight and sense of touch… but according to him not his sense of humour or determination! “I am no longer able to work and so my lucky wife has had to go part time to be able to spend more time with me... I mean care for me,” jokes Richard. “Before the stroke, I was always on the go but that hasn’t stopped me as we are still able to go out, and now I get the best parking spaces!”

It has been a long journey for Richard, but he says he couldn’t have done it without the support of the team from the hospital. He adds:

“I have had to have a lot of interventions from many different departments at QA, St Mary’s Hospital and Southampton General Hospital including Audiology, Ophthalmology, Orthoptics, Orthotics and Maxillofacial.  Not forgetting the Occupational Therapists, Speech and Language Therapists, Physiotherapists and Neuro Psychiatrists, the nurses and Health Care Assistants within the wards.

“Every member of staff from the cleaners to the Consultants, they have all had a role to play in my recovery.  The staff at QA are amazing, especially all those on F1 Ward where I spent many months.  But I must say there is a special place in my heart for Mihaela Bartlett, Occupational Therapy Associate Practitioner and Laura Ineson, Physiotherapist. They never gave up on me, their support and dedication was out of this world.”